Science-fiction ought to interest me, everyone assumes, and it increasingly does; but it has to overcome a high degree of resistance. Ever since 1987, my first term as an undergraduate, when Patricia Ingham suggested I read Gillian Beer’s Darwin’s Plots, I’ve been interested in how literature might have drawn on science, but in the vast majority of cases the way that science fiction draws on it is less interesting than the way that mainstream literature does. Put sweepingly, science fiction seems to ask how a scientific idea, extrapolated or implemented, might alter the real world, and it then represents that world; mainstream literature asks (though only occasionally) how a scientific idea might alter the way we write, and it then writes about the world through that altered medium. How might human relationships look different in the light of Darwin’s proto-ecological view of the world, the ‘tangled web’?  How might narratives of change look different in the light of Darwin’s gradualism?  These are the kinds of question that, on Gillian Beer’s account, Thomas Hardy and George Eliot ask.

My resistance to science fiction hadn’t set in place when I read John Wyndham at school; I wish once I’d exhausted Wyndham I had been pointed towards further science fiction. I have the feeling that someone suggested Isaac Asimov; certainly there was a family friend a few years older than me who read him obsessively.  If I did get as far as reading him, it didn’t connect; and I suspect I got no further than being put off by the covers. H. G. Wells I read a little of while writing my thesis, because he’s a frequent point of reference for popularisers of relativity theory: most often The Time Machine, but also ‘The New Accelerator’.  At some point in the 1990s Dent / Everyman did a great cheap edition of a lot of the early novels — mostly the scientific romances, but also some of the realist fiction like Kipps.  They were riddled with typographicals, but at least they were affordable and well printed, and so I read a little more widely in his earlier work.

I’ve not, in general terms, been very receptive to recommendations as to what I might read.  Well-meant suggestions were a constant burden in the first few years of my thesis, when on hearing a brief account of what I was working on, people would suggest something — often science fiction — and I would have to smile politely. (Part of the problem being that I didn’t have a rock-solid definition of what it was I was doing, so couldn’t take the conversation forward.)  A variant of this came very early on when I met a very bearded Linguistically Innovative Poet at an end of term party (so probably in June 1991), and mentioned my interest in poetry and science, which at that point was focused on Peter Redgrove and Ted Hughes.  He pooh-poohed my interest in mainstream poets and suggested I should take a look at J. H. Prynne.  Although I was hurt by what seemed an out-of-hand dismissal of my then-key poets, Lingustically Innovative Poet seemed more engaged with what I was saying than most, so I looked up Prynne on the Bodleian catalogue and ordered up a pamphlet or two: I can’t remember which, but I guess I chose the one with the most promising title, and that that must have been High Pink on Chrome.  Unfortunately nothing in my undergraduate experience had given me a way of grasping what I encountered, and further guidance was much harder to come by at a time when there was no internet worth mentioning, and only a fraction of the Bodleian’s catalogue was electronic. It was another seven years before I came back Prynne.

Taking up recommendations is a combination of the right person at the right moment.  I think I owe my reading William Gibson’s Neuromancer to a very persuasive postgraduate medievalist at Bangor, and Neuromancer went a long way to rehabilitating science fiction in my eyes. In an odd way, something about the writing reminded me of Virginia Woolf: I’ve never returned and read it more analytically to decide what, but it must be to do with the intense fusion of external reality and internal consciousness.  I’d worked as a programmer for a year between A-levels and university, and the idea of experiencing data-structures as physical structures seemed intuitively right. But though Neuromancer rehabilitated the genre, it didn’t lead to any further reading.  My most recent purchase-on-recommendation came at the suggestion of Peter Middleton, I think following an amazing conference paper by the historian of science Jim Endersby about the evening primrose and what early C20th science perceived as its ability to evolve not by gradual accumulation of small changes, but in large scale reorganisations.  The book that Peter mentioned was Greg Bear’s Darwin’s Radio. 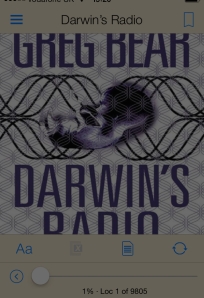 Darwin’s Radio: I read it on Kindle

Bear imagines a mechanism whereby homo sapiens might undergo a radical reorganisation that would make a difference as large as that between homo neanderthalensis and sapiens, and also imagines that the same mode of reorganisation was responsible for the emergence of sapiens from his neanderthalensis.  What would happen, socially and politically, if a wave of mutant births began to occur? How might scientists disagree about the causes, and how might politics and other non-scientific factors affect their judgements? The novel raises these large issues, but by keeping a tight focus on a scientist and his pregnant partner, it avoids being a discussion novel. The plot is basically thriller-like, so the characterisation isn’t deep or complex, but it’s deep enough, and the ideas are completely fascinating.  As I neared the conclusion and the expected birth of the central characters’ baby, I had to stop reading for a while: early in the novel, very few of the mutant pregnancies have come to full term, and the novel insinuates than many of the miscarried foetuses were horrendously misformed. One might accuse Bear of being manipulative in this aspect of the plotting, taking a primal human interest and relying on it rather than any subtler emotional investment; but given the central theme of the novel, it’s necessary, and as the main structure of the novel is thriller-like, it’s an unusual move to build the final phase of the action around a pregnancy and its outcome.