Mrs Dalloway or Scrambled Eggs Super!?  I was on the verge of choosing the former, when I saw someone else tweet Judith Kerr’s The Tiger Who Came to Tea, and realised that across six months or so last year and earlier this year, I read Dr Seuss’s egg-collecting romance epic pretty much every night to our three/four-year-old.  And although my re-readings of Mrs Dalloway may stretch into the dozens, I’ve no reason to think that they run over a hundred. 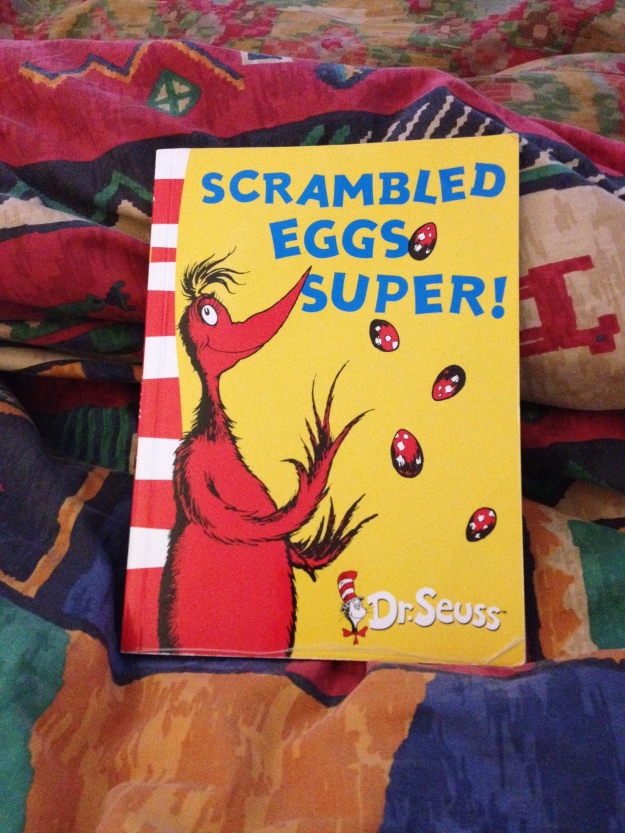 But there’s a respect in which I have genuinely re-read Mrs Dalloway more often than Scrambled Eggs Super. When I’m reading the latter, I’m scarcely little more than a vocalisation machine for Dr Seuss’s words. I tried, for the sake of my own sanity, to find minor variations in rhythm and intonation each time I read it: sometimes running one line into another, sometimes emphasising line-endings and rhymes; sometimes accelerating and decelerating.  But for all that I tried, it’s not particularly flexible verse for a reader; it’s got its own insistent rhythms and it doesn’t want to allow you much leeway.  And as for interpretation at a semantic level, if there is scope for that, I’ve not risen to the challenge.

Whereas with Mrs Dalloway, each re-reading has brought new emphases, has found new images emerging, or new interconnections, or new questions as to why Woolf does what she does.  Although I have re-read it cover-to-cover many times, I’ve also re-read selected scenes and episodes far more often, sometimes with a view to an impending class or tutorial, sometimes with a view to writing a lecture or seminar paper. I first read it in an unannotated Grafton paperback in 1987, as one of several novels by Woolf for one of my first-year tutorials;  that was the copy I was still using when I decided that Woolf would form part of my doctorate, probably sometime in 1991 or 1992.  When I started teaching Woolf for a module at Bangor (1996 or 1997) I insisted that everyone use the Oxford World’s Classics editions, but soon after had to obtain the Penguin Classics ones for writing a chapter in the Cambridge Companion.  Then in 2000 David Bradshaw did an excellent new edition for Oxford World’s Classics and I had to learn to find my way around yet another pagination. As I’ve become more familiar with it, re-reading a small part reactivates memories of the whole; also, as I’ve become familiar with the various copies I’ve owned, I’ve learned to find passages quickly, in spite of the lack of chapter divisions.

Mrs Dalloway teaches its reader about the power of repetition and echo from the very start: everyone notices Big Ben and the leaden circles dissolving in air, and many readers must be grateful to have Big Ben’s chimes as a substitute for chapter divisions, as a fixed reference point in the text in the absence of chapter divisions, even while the text reminds us that there’s a kind of violence in such divisions and subdivisions, through the clocks of Harley Street slicing and shredding the day.  Once you’ve followed that cue, there are plenty of others: those shaped around the parallelism between Septimus and Clarissa, especially, but also others that are more elusively riddling such as Peter Walsh’s image of himself as a buccaneer being echoed in Elizabeth Dalloway’s idea of the omnibus being a pirate ship.  Mrs Dalloway has rhythms: not — or not only — prose rhythms, but structural rhythms.  Unlike Dr Seuss’s verse rhythms, they’re subtle and they allow the reader great flexibility about where to place the emphasis.  As Woolf said in her often-quoted essay ‘Modern Fiction’, ‘the accent falls differently from of old.’