Condition Blue had been the right album for me at the right time, even if that meant it encouraged me to wallow in morose sentiments in late 1991. By the time of its successor, Waiting for the Love Bus, in 1993, I was in need of music and lyrics that would make sense of the horrendous post-Thatcher years, and the album didn’t deliver.  I think I wanted more of the loud and raucous sound of Condition Blue, but with an eye directed to the outer world; Love Bus sounded too clean. The Western Family live album had reassured me that Pete Crouch could play loud and dirty as well as clean and precise, but that aspect of the live performances didn’t come through in the studio. Although I wasn’t a grunge fan, guitars in the early 1990s had got a lot dirtier.  Added to that, I’d been playing bass in a band through 1992, and we’d sounded increasingly distorted and dirty, partly through choice, partly though lack of a good amps.

Love Bus has some great songs on it.  I like the groove of ‘Penguins’, and I like ‘Whaddya’, but the album doesn’t hold together.  ‘Ben’ does address the cultural-political scene, but there the anger is restrained, musically. However, there’s one really standout track that everyone should hear: the first one, ‘Rosemary Davis World of Sound’:

Rosemary Davis (b.1926) was the BBC person who did field recordings for use in BBC radio drama, later released from 1969 onwards as a series of LPs, ‘Sound Effects.’ Here’s the cover of the first (RED 47M); The Jam later paid tribute with the cover art for their Sound Affects (1980)

The track listings don’t look like the most promising material for a songwriter: 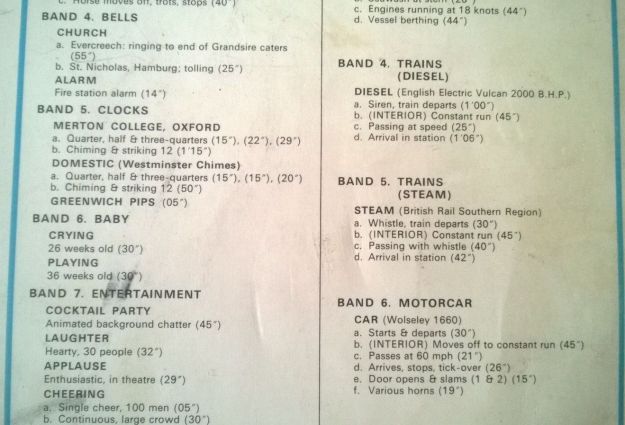 But, with some selectivity and splicing together of different elements, it becomes an evocative collection of phrases.  (You can do the Googling yourself, but it seems that Pat takes phrases from several of the Sound Effects LPs).  There were hints of this method on ‘Harlan’ from Condition Blue, which incorporates the titles of several of Harlan Ellison’s stories, but here it’s done much more rigorously.

Stylistically, the music draws on the psychedelic drones and analogue echoes of the Spacemen 3: Pat had been a big supporter of the band from its early days, and Sonic Boom has contributed to several Jazz Butcher albums. One might take the implication to be that being lost in Rosemary Davis’s world of sound is some kind of trip, but Pat’s own account of the appeal of the field recordings is that today ‘these sounds, assiduously recorded in the early sixties, seem to come from another world.’*