After the return to the Jazz Butcher that came with Glorious and Idiotic and Rotten Soul, Pat divided his time between solo performances (sometimes accompanied by a range of musicians from Northampton), and a new project, in some ways a development of Sumosonic, called Wilson. Pat started with the idea of making music solo at home, but Wilson ended up being a six-piece band (and sometimes larger), with drummer, percussionist, bassist, two guitarists, and a vocalist.  Their sound was heavier and harder-hitting than Sumosonic, built around the rhythm and the bass and samples.  They made their live debut in March 2001, and played their final gig in August 2009, though there was a one-off reformation in 2012 for the launch of a DVD of the 2009 gig.  Here’s ‘Quality People’:

I saw them four times in 2006, a couple of times in Oxford, and a couple of times in Northampton. All of these gigs were special in different ways (one in Northampton was at the Balloon Festival, and the other was as the support act for the Woodentops in their first gig in 14 years. But the first and most memorable was very late at the Exeter Hall, way down the Cowley Road, on a ridiculously hot in June 2006: everyone’s shirts stuck to them; Stevie’s amp died the death; there was dancing, and a long walk home. 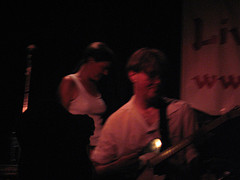