In late 1970s and early 80s New Wave there’s a distinct and distinctive strand of self-conscious deconstruction of the conventions of pop and rock, usually done in a comical spirit. Hipgnosis’s cover for XTC’s Go 2 (1978) was one of the most conspicuous demonstrations: 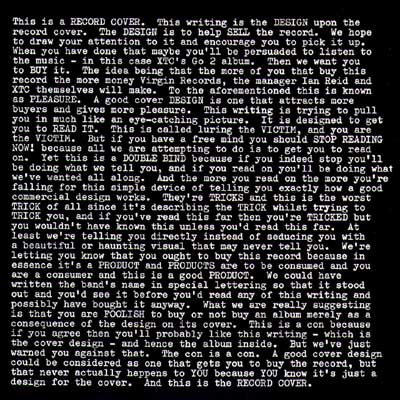 Wilson Neate’s 33 1/3 book on Wire’s Pink Flag (1977) sees Wire as implementing such critiques in their song writing: their song structures self-consciously dismantle conventional pop music structures; they lengthen or shorten introductions, and in other ways play with the frames.

Much later, on Harvester, the Blue Aeroplanes covered Wire’s ‘Outdoor Miner’, so that band were clearly on their radar, but what the Art Objects do in ’20th Century Composites’ is closer in spirit to XTC’s album cover: Art Objects no more abolish the catchy pop song than XTC get rid of the outer sleeve of their record; they continue in the tradition while drawing attention to its weaknesses and exhaustion.

The acoustic guitar riff may have taken only seconds to compose, but it’s brilliant: it’s catchy, but  it derives from twelve-bar boogie; played on an electric and it could sit quite happily at the start of a Status Quo song.  But there, after the first few iterations, you’d expect the chord to shift up; Art Objects stick with the same two chords, like a stuck record, and at the end of the first verse there’s an sudden silence.  Then were back into the riff again for another verse, before the sound fills out slightly for the chorus, with a catchy but angular keyboard riff coming in.  The backing vocals in the chorus are a neat touch: ‘Ba-by’, sung with a slur between the two notes, and recorded with little or no reverb: compared to some of the band’s chorus additions, it’s minimal and it’s almost mechanical in its delivery. It’s more the evacuated sign of a chorus rather than the thing itself. The long drum roll after the second chorus (slightly phased) also feels like a deliberately performed cliche, though like all these things, one that lets the band have their cake and eat it.  The coup de grace comes with the lyrics on the play out: ‘Verse chorus / Verse chorus / Middle eight / Solo’: a standard rock-song structure that, in their more experimental pieces, Art Objects were working to go beyond, as were  The Blue Aeroplanes after them.

It’s hilarious and catchy. Where the lyric goes slightly wrong is more an ideological matter: it conflates the artificial and formally cliched art work with the artificial woman.  It might mean that it’s about the artificial depictions of women in cliched works of art (she has stepped ‘out of the page’), but it falls a bit too easily into a misogynist tradition of rejecting women for their artificiality.  (See Jonathan Swift, for example).  Particularly problematic is the denial of self-reflection in ‘There are traditions you can’t even feel / Moving in your blood’: the speaker sets himself up as the one who knows, the one who can pass judgement on the artificial construct.

LYRICS (from the liner notes)