I hesitated before reading this one, on account of an Amazon review which complained that there was no original research into the making of the album, and implied that Lethem put himself and his own subjective response at the centre of the book. I probably should know Lethem’s novels, but I don’t, so Lethem himself isn’t of interest to me.  But I’ve enjoyed Kevin Dettmar’s book on The Gang of Four’s Entertainment, and in it Dettmar thanks Lethem, who’s a colleague at Pomona; and I’ve enjoyed the sheer variety of ways of writing about music that you find in the series, so I took the plunge. 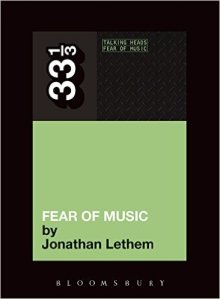 The big conceit running through the book is that Lethem the narrator is also trying to account for and take into consideration the feelings of the person he was when he first heard the album, “the boy in the room” in 1979 in New York City.   At times the playing between the two positions is self-conscious and showily written, as in this passage in first “Prelude,” where Lethem recalls hearing an advert on the radio for the new album:

But we’re ahead of ourselves. The boy hasn’t heard Fear of Music yet, just the words “Fear” “Of” “Music”. (Is it “Fear-of” music?  Of what would “fear-of” music consist? Is fear made of music?  Can an album be afraid of itself?)  For the signal peculiarity of the long-lost Fear of Music radio spot is that though it was a commercial for an album, it didn’t consist of any actual music.  It was a map that not only wasn’t the territory, it didn’t consist of more than the word “map.” A connect-the-dot diagram with only one dot. An artifact inviting you to consider your now possible future encounter with a subsequent artifact.  To presume to say more would have been to betray the spirit of not-yet-knowing which still shrouded, for the boy in room, merely the whole area of everything that matters most: cities, drugs, sex, music, memories, life. (p.xi)

Reading this, I wondered whether this book was going to irritate me on an epic scale.  I turned out to be wrong.  Much later on (p.103), in his account of the song “Animals,” Lethem digresses self-indulgently into an account of himself as a forty-something father who walks the family pet and how he connects to the nine- or ten-year old proto-boy-in-room who also owned a dog.  The passage is witty enough in its own right, but I’m not sure it takes us any further forward in understanding Fear of Music.  But that passage isn’t typical.

If you recognise the boy-in-his-room a trope, then Lethem can largely be acquitted of the charge of self-indulgence.  The trope allows Lethem to negotiate between what he knows as forty-something adult and writer and what he residually feels because of the intense reactions of his teenage self, and as such it’s interesting and subtle.  There are songs that I heard with great intensity when I was fifteen or seventeen that still feel spine-tinglingly astonishing when I hear them again: I can’t be sure whether these are simply very good songs with sufficient depth to survive repeated listenings, or whether I’m simply being transferred back to the earlier state of mind. So I recognise the problem that Lethem’s dealing with, even if I wouldn’t have dealt with it this way myself. And I also suspect that the emphasis on personal response (setting aside the boy-in-room trope) allows Lethem more freedom when it comes to describing Talking Heads’ music. For though of course he has plenty to say about the lyrics and the underlying ideas, he’s also great at writing figuratively and evocatively about the way this record sounds:

Judging by the singer’s tone of panic, those rays passing through paper and self and love affair all too absolutely unmake this song’s effort to “hold on”; the guitars, hypervigilant in their foxholes, seem to agree (pp.29-30).

There is a piano in “Heaven.” The guitars defer to it, This is “the slow song,” not because the tempo’s so different from “Memories Can’t Wait” or “Mind” (and “Drugs” will be far slower), but because the song demands it be understood that way.  The guitars, to this point always doubled up as if in laughter or gasping for breath, now unkink themselves, quit scratching and jeering (p.88).

While I could wish that Lethem would pursue these insights and ask how it is that a song can “demand” to be understood as slow, or how it is that a guitar “defers” to a piano, the basic means of evocation is great, and I wish there were more writing like this in the 33 1/3 series.  And as a one-time bassist, I like it that he’s appreciative of what’s going on down in the engine room, even when it seems to be a mutiny.

Lethem’s figurative mode of expression also allows him to slip some insightful hypotheses into the mix, giving the reader the option of moving straight on, or unpacking them at greater length.  E.g.:

Basically, “Cities” is “Life During Wartime”‘s younger brother, as disco is a younger sibling to funk, more frisky and free, not bearing so many of the burdens of its progenitors. Like a lot of younger brothers, “Cities” parrots some of its older brother’s cherished notions and cheekily contradicts others, or declares them irrelevant, not such a big deal (p.39)

The remark about funk and disco is almost throwaway, but worth chewing over.

Lethem’s approach to the lyrics has the virtues of flexibility and the vices of inconclusiveness.  He tends to quote single lines and playfully explore their implications, but is reluctant, perhaps reasonably enough, to make prominent claims about larger units of the lyrics. Perhaps that reluctance is acknowledges that the lyrics are always fragmented; “I Zimbra”, which he discusses in terms of Hugo Ball and Dadaism, is the most extreme instance.  The readings of the lyrics are an entertaining performance, but I’d be hard pushed to summarise Lethem’s argument.

The structure of the book is also well thought out: it’s basically a song-by-song account of the album, but the analyses of the songs are interspersed by more general reflections about the album: “Is Fear of Music a David Byrne album?”; “Is Fear of Music a New York album?”; “Is Fear of Music an Asperger’s Record?” and so forth. Sometimes these questions are prompted by the track that has just been discussed, sometimes their relation to the surrounding material is more arbitrary; but they allow Lethem to take a wider perspective about the band without straying too far from the record itself. And that’s another virtue of this book: it’s informed by a clear opinion about Fear of Music‘s place in the larger history of Talking Heads, but it’s still seriously interested in the record itself; the album isn’t just a pretext for larger musings about the band.

There isn’t any original research in this book in the sense that there is in J. Niimi’s book on Murmur, or Wilson Neate’s on Pink Flag: neither the musicians nor the technicians have been interviewed; Lethem hasn’t looked at contemporary reviews to see whether his views were typical or idiosyncratic.  But there’s research in the sense of thinking about the record, and thinking about how first responses survive in later listenings, and thinking about how to put all of these ideas and impressions into words.  As a book about popular music it’s not perfect, but it’s original and inventive.