An unpaid nurse and a political assassin: that’s my favourite fictional father.  I must admit it took about ten days of pondering this topic to realise that it was timed to coincide with Father’s Day, and it took me almost as long to think of a fictional father who I felt sufficiently excited about to. For a while I’d planned to subvert the topic and go with my favourite fictional mother, Mrs Ramsay in To the Lighthouse, but Elizabeth Gaskell deserves some space. 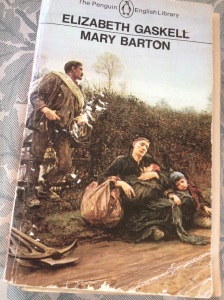 When we first meet John Barton, in Gaskell’s Mary Barton (1848), he’s ‘a thorough specimen of a Manchester man’, his features marked by ‘a sort of latent, stern, enthusiasm’.  He and his wife are in fields outside the city with their friends the Wilsons. Jem Wilson is already carrying one of his twins in his arms, and John offers to take the other from his wife; a small gesture, but one that it signals a kind of tenderness in the man.  Later, when his workmate Ben Davenport is ill with a kind of typhoid in his squalid cellar home, John goes in search of medicines, nursing him, though to no avail; Ben dies. A succession of deaths interwoven with domestic details makes the opening ten or so chapters among the most powerful in Victorian fiction.  Part of that comes from Gaskell’s attempts to transcribe the Manchester pronunciation of the time, and to honour the dialect usages. As with all dialect writing, that places some obstacles in our way, and it sets the northerners apart from the standard English of the narrator; but it gives their speech a kind of independence too, which is an independence from their being narrated. The dignity accorded to the workers isn’t incompatible with their being able to make an analysis of their situation, even if Gaskell’s narrator sometimes anxiously disavows their point of view.  John knows the basics of Marxism avant la lettre: ‘How comes it they’re rich, and we’re poor’, Jem Wilson asks, during a period of downturn in the cotton industry; responds John, ‘You’ll say … they’n getten capital an’ we’n getten none. I say, our labour’s our capital and we ought to draw interest on that. They get interest on their capital somehow a’ this time, while ourn is lying idle, else how could they all live as they do?’

Dejected by the continual hardships and the succession of deaths, John turns to opium, and Gaskell becomes less sympathetic towards him.  She had originally intended to call the novel ‘John Barton’, but it was never going to be acceptable to Victorian readers to have a murderer as hero.  John also turns to trade-union membership, which Gaskell treats as if it were as bad as opium.  Mary comes to dread the sights of his fellow union-members coming to visit:

there were not seldom seen sights which haunted her in her dreams. Strange faces of pale men, with dark glaring eyes, peered into the inner darkness, and seemed desirous to ascertain if her father were at home.  Or a hand and arm (the body hidden) was put within the door, and beckoned him away.  He always went.

It’s like a first draft of the scene in Heart of Darkness where Conrad presents the Africans as little more than a jumble of limbs and eyes in the foliage at the side of the river. Some chapters later, furious at a caricature drawn of them by a mill-owner’s son, Harry Carson, and by the refusal of the ‘masters’ to hear their demands, the unionists decide to murder Harry Carson, and they draw lots to decide who should do it. John Barton becomes the murderer.  Even at this stage in the plot, Gaskell still shows us his tenderness: on his way to assassinate Carson, Barton comes to the aid of a small boy who has lost his way, and leads him home; but his destiny is determined for him. After the murder, John almost disappears from the narrative, and its construction becomes more melodramatic. Mary’s lover Jem is wrongly suspected of the murder, and Mary must prove his alibi. The novel becomes a page-turner in a more conventional mode, but sacrifices the patient, slow-paced examination of domestic lives that makes the opening chapters so powerful.