Anyone looking at this photo might reasonably conclude that I own twelve copies of Virginia Woolf’s Night and Day — but I would deny it. 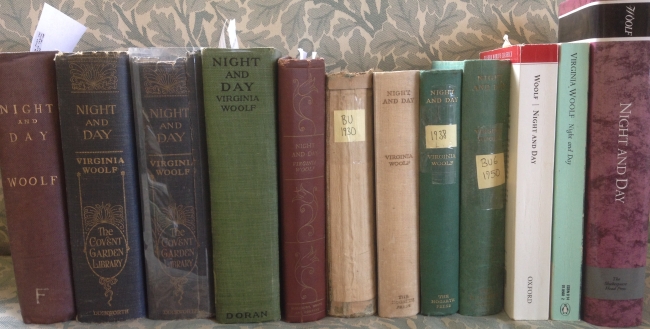 Twelve of my copies of Night and Day

This line-up omits the first copy I ever read, the Grafton paperback, which is in a cupboard at my parents’ house. It was followed by the Penguin Classics edition, which the editors of The Cambridge Companion insisted I use for my essay there, and it was followed by the Oxford World’s Classics which I acquired for my Authors in Context book on Woolf.  The rest followed in the course of editing Night and Day for the Cambridge Edition, and there are really only two duplicates here.  At the far left is the first Duckworth edition, 1919; next two it are duplicate copies of the second impression, packaged as the Covent Garden Library edition (1920).  Then there’s the first American edition (Doran, 1920), and then the undated reissue of that edition. Then two copies of the 1930 Hogarth Press edition; then the 1938 and 1950 reprints; and at the far right, the Shakespeare Head edition, ed. J. H. Stape. From the point of view of textual editing, any one of these editions might contains variants in the text; the ones that matter are the ones that came out in Woolf’s lifetime, where she might have influenced the text. (I looked at the 1950 edition because it’s possible that an author might leave instructions to be acted on posthumously.  In this case, there’s no internal or external evidence that Woolf did so; but you never know till you’ve looked.)

What editing a text impresses on you is the sheer mobility of movable type.  To take an extreme example, here’s part of p.157 in the 1919 edition:

And here’s what had happened to it in the 1920 printing:

And though there was an opportunity to put things right in 1930, here’s how it looked:

And although in 1950 someone has apparently attempted to rectify the slipped ‘u’ of ‘you’, they didn’t realise that the word had slipped onto the wrong line, and it was a small symptom of a larger disaster.  At times you wonder whether the medieval way, manuscript transmission, might not have been more accurate. I have more than one copy, but as copies they’re not exact.