Like every other reader I know, I try to avoid adaptations of novels that I’ve not yet read, and I’m wary of adaptations of things I know well.  It hardly needs spelling out: it’s supremely annoying to have your own visualisation of a character or a locale displaced by the director’s; you can never return to the text without those embodiments in mind.

I’ve recently had a new manifestation of the problem, reading Graham Greene’s The Quiet American: I’ve never seen the 2002 film with Michael Caine and Brendan Fraser, but I must have seen a clip of it, because early on Fowler’s terse narratorial voice kept realising itself in my head in a Michael Caine accent. 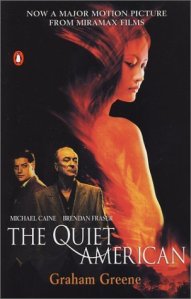 But in thinking about this blog entry, I’ve recognised a related tendency in my book-buying which smacks of petty snobbishness: if there’s a choice between buying the film tie-in edition of a text and the regular edition, I always opt for the regular one, even if the text inside is identical. I might have got into this habit because I didn’t want the visualisations on the front cover to influence my visualisation of the characters, but I suspect the real motivation is lower: I didn’t want people to think the only reason I was reading the book was that I’d seen the film. Or at least that I was uncomfortable with the unbridled commercialism of film tie-ins. (What that attitude forgets is that publishing is a commercial business: film tie-in covers are no more ‘commercial’ than regular ones, only differently so.)

And so the only film tie-in I can find anywhere among my books is Elizabeth Bowen’s The Last September (still on the to-be-read pile), bought secondhand through the post, so I hadn’t realised what the cover would look like.  The text inside is the standard Vintage edition; but it has a film tie-in front cover, and was apparently a freebie with Woman and Home magazine.  I wonder now why I haven’t yet read it, and wonder whether in some way the film tie-in cover is deterring me.